One of the most asked question from lenders on the FUND Score/Report, has got to be  “Its great when my borrower is investing in a brand with a high franchise credit (FUND) score, and there are many, but what does it mean to the loan or my lending process when the franchise is scored low?” To fully answer that question we need to walk through a couple of common reasons a brand might get a low score and what each instance might mean to your loan.

A FUND report is based on public information – in other words, the availability of information is the foundation of assessment. Transparency is heavily weighted in each of the score metric. A franchisor could improve its system’s FUND score by providing more information. Take the Medicine Shoppe for example, their score has them at the “low performer” range. The franchise loses points by not providing visibility into major performance indicators, including Average Unit Revenues (AUR), Unit Economics, and the franchise’s financial statements. Simply by making this information available, The Medicine Shoppe’s FUND score could have improved by 130, to 320 points. FRANdata values the level of transparency in the underwriting process and quantifies availability of information in the formation of the final FUND score, simply because transparency makes full assessment of a brand possible.

In our experience it is a cause for concern if a say, 400 unit franchise, provides no information. What this means is you have no basis for evaluating whether the loan will be repaid.

Unit closures could result from reasons other than operational issues, so they do not necessarily correspond to performance failures. For example, Kiddie Academy has a HUSR score of 20 (out of 150). Upon further analysis, its HUSR was dragged down by a dip in 2011. The significant decrease was due to the closure of 21 franchised units in New Jersey, which had been developed by the sole area developer. That year was an aberration and does not signal any larger operational issues. Despite low HUSR score, FRANdata digs into reasons of closures and looks at the big picture of the system. 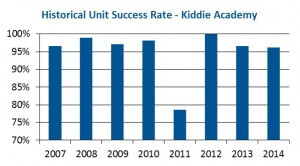 System performance is the ultimate determinant of FUND scores, but good transparency and an insight into numbers enables lenders use the FUND reports as a verification of good performance as well as a jumping off point for better and more in-depth franchisor due diligence on the borrower’s application.